We’ve all been waiting for it – the single legal change that will open the floodgates & put an end to prohibition across the United States, with more countries to follow. Could this be it?

In May of 2015, Senators Rand Paul, Cory Booker and Kirsten Gillibrand introduced a bill called the Compassionate Access, Research Expansion and Respect States Act, AKA Carers Act, that would severely limit, if not completely obliterate, the US federal government’s right to interfere with states that have legalized medical marijuana.

The Carers Act also makes it legal for researchers to conduct studies on the medical benefits of cannabis in the US. Nice to see someone finally got their bum off their shoulders for once, isn’t it?

Here’s a low-down of exactly what the Carers Act includes:

They’ll even look up the contact info for your Senator so you don’t have to do anything but fill in the blanks. But don’t wait long – this bill is in committee now, but no one yet knows when or if it will come out & up for vote. Our combined voice could make the difference.

Even if it doesn’t pass, this is still a groundbreaking move, and it shows that the powers that be are listening to the people – even if they move at a snails pace.

Good things are coming, my friends!

NB: I don’t live in the US – why should I care?
Once researchers can prove the real medical benefits of herb, it will force other countries to look at cannabis in a new light too! Or that’s what we at Gorilla Seeds hope for anyway.

Want to win yourself some sticky weed seeds?

You’ve been on our backs for ages about stickers, so The Gorilla finally got some, and to make sure the 1st run of 420 stickers get to the right hands, we’re running the YOU’VE BEEN GORILLA’D – STICKER COMP.

Slap our new stickers in the funniest, hardest to reach and most daring places, take a picture of it, post it on our Facebook page or sponsored forums and you’re in the competition.

What can I win?

We’ve set aside an amazing list of high quality cannabis seeds, from the most respected breeders on earth and if that’s not enough, we’ll even let the best entries pick their own seeds from our website.

3 packs, 5 packs, 10 packs and mixed packs including high THC, regular, feminised, indica, Sativa and Autoflowering strains will all be up for grabs. Here are a few examples:

We would love the riskiest situations to get slapped with the Gorilla sticker, but be careful – slapping a cop in the face is a jailable offence in most places, even if it’s just a sticker!

THE BEST “YOU’VE BEEN GORILLA’D” will win instant prizes. We have a list in mind for the best shots, but it’s completely up to you. Gran’s forehead or car bumper will do, but Air Force One or Big Ben is better – breaking into NASA and slapping a sticker on a satellite bound for mars would be epic and probably make the news, but don’t blame us if NASA security uses deadly force!

All other regular places will be added to a list and multiple winners will be chosen to receive free seeds.

*How do I get a sticker?

Only 1 will be issued per person, and we only have 420. Facebook message or forum PM The Gorilla your postage details & email address, and we’ll get one in the post. The comp starts as soon as you get the sticker and will run until we say.

There are no rules, only common sense to what you can do with the stickers. But remember – we’re not bailing you out or paying damages if you do something crazy.

Germinating any cannabis seeds you win from Gorilla is strictly forbidden in most places. Don’t get them wet. Ganga seeds are sent by tracked mail but are not guaranteed – missing seeds must be taken up with postal/customs officials. Stickers sent by standard post.

Competition seeds CAN NOT be reshipped!

*Alternatively, you can print out the image below and blu tack or sellotape your own sticker. 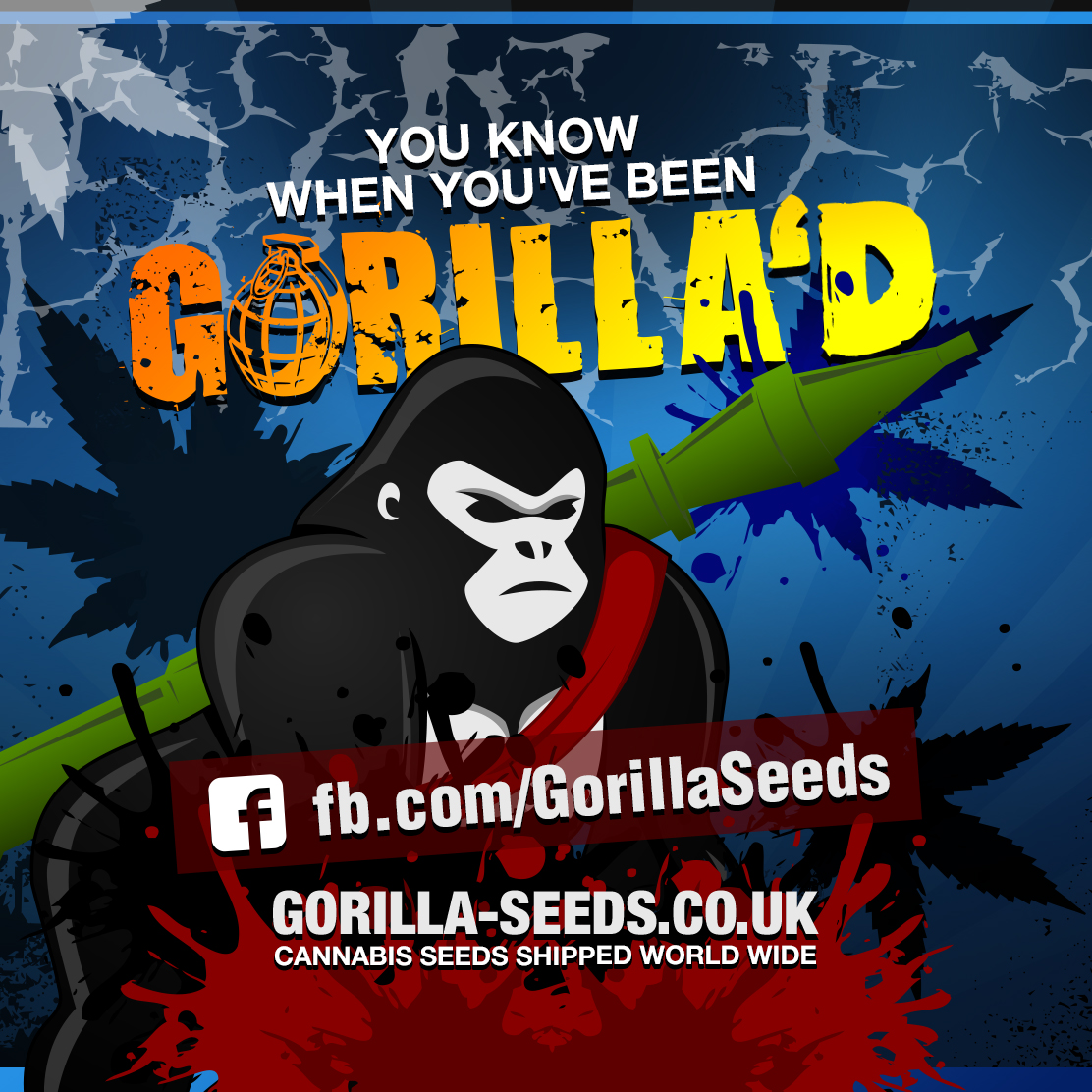 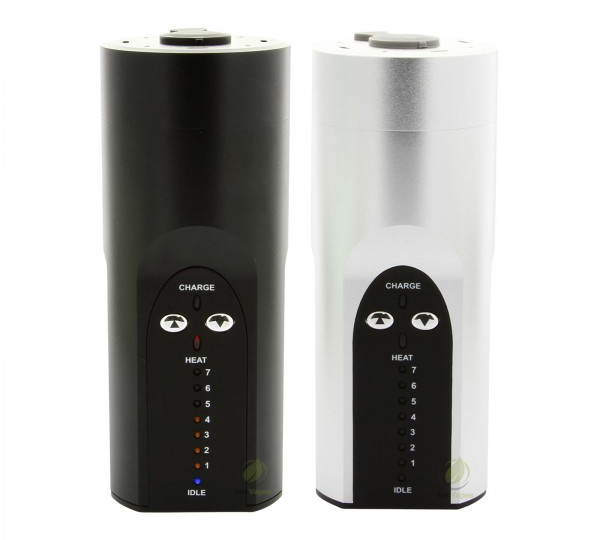 More & more people are giving up their papers, wraps, bowls & bongs in favour of cleaner, more efficient vaporizers. Once, there were only a few products on the market and almost every single one looked a more than a little complicated to use. Then, there was a flood of new vapes, each one promising to be the magical device that really did conserve herb without being hard to understand or easy to break. Many, unfortunately, were disappointed.

Enter the Arizer Solo! Combined, the Gorilla Crew has probably tried a record number of good & not-so-good vapes, so we were skeptical to say the least when this one arrived unannounced from our friends over at SmartVapeUser.com. We cheated a little and watched their video first, then we got down to business.

As we watched The Gorilla personally unbox the Arizer, it looked exactly like what we had seen – no surprises yet. There was 1 streamlined, black vaping unit, 1 average-looking wall charger, 3 pieces of glass (only 2 are really usable for our purposes), a cleaning brush and a somewhat sad looking little bag of potpourri that went directly in the trash. So far, so good.

We immediately put that bad boy on charge in hopes of taking the edge off at the end of a very long day in the cannabis seed business (it’s a hard job, but someone has to do it), and we were not disappointed. Right around 4:20, the crew gathered round the break room, packed that glass stem as tight as we could pack it, slipped it in the vaping unit, turned it on (hold down both buttons for a few seconds) and set the temperature to 5 as we’d been told to do (simply push the up button until you get to 5).

Dirty jokes were bandied about for about 2 minutes until the Arizer Solo reached temperature, then The Gorilla accepted the honorary first vape before the rest of us gave it a try (You wouldn’t let a little Gorilla slobber keep you from some fine herb, would you?) and declared it smooth, flavourful & Gorilla-approved.

I can’t say that we’ll all be getting one since there are some confirmed dabbers & medible fans on staff, but everyone agreed that for its size & simplicity, the Arizer Solo Portable Desktop Vaporizer was the best vape we’d ever tried. It’ll definitely be put through its paces around the warehouse.

However, there are a few things to remember. The black vaping unit doesn’t feel hot even when it’s at temperature and the mouth end of the glass tube doesn’t heat up either, but the bowl end of the tube does. Be careful during use & let it cool off before re-packing.

Also, this is a portable desktop vaporizer in that you can use the Arizer while walking around your house or yard or office or wherever you like to do that kind of thing. However, we couldn’t recommend this as a travel vape because of the glass. We think that would be too easy to break. But, hey, they gave you two, right? So give it a try if you feel like it.

Finally, you can’t set an exact temperature like you can with some more complicated & expensive vaporizers. We found that 5 was about perfect & some like to go to 6 to get every last little bit of goodness out of the herb before a re-pack. If that’s not good enough for you, then you might want to pass on the Arizer Solo & go with something else.

Because The Gorilla & Gorilla Seeds is all about saving you money, we couldn’t end this review without pointing out that our friends over at SmartVapeUser.com have some free vaporizer coupon codes for the asking to save you some cash on a new Arizer Solo or any other vape featured on their site. Check ’em out!