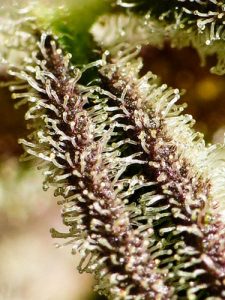 You’ve definitely heard of THC (Tetrahydrocannabinol), the molecule that gets you high and is found in most strains of cannabis apart from industrial hemp. You’ve almost certainly heard of CBD (cannabidiol), which is well known to have significant medical effects. But, you probably haven’t heard of Cannabigerol or CBG, the incredibly interesting parent compound of THC and CBD.

Cannabigerol is a non-psychoactive cannabinoid found in cannabis plants; it’s thought to be the ‘stem cell’ compound that is converted inside the buds to produce the cannabinoids that we know and love, THC and CBD. It is also thought to produce some of the plant’s well-known medical effects. For example, it has been well documented to decrease intra-ocular pressure, leading it to be an effective treatment for Glaucoma.

CBG was first discovered in 1964 as a constituent of hashish. In 1975, scientists found that
all minor and major cannabinoids, of which there are many, start out as CBG. Most plants don’t have a large percentage of CBG during the final flowering stages because it is readily converted into THC and CBD by the plant’s enzymes.

CBG works in the body to prohibit uptake of a chemical known as GABA. When GABA is inhibited, the body’s muscles relax and anxiety is reduced. It has also been recorded to have some anti-depressant effects, making it a truly interesting compound.

Though not much research has been done on CBG, amazingly it has also been recorded to produce anti-inflammatory effects like those of ibuprofen, by working on a set of enzymes in the body known as COX-2 receptors. It was also shown in an Italian study to have an effect on inflammatory bowel disease, indicating that “CBG may represent a new therapeutic opportunity” for patients who show symptoms of the disease.

Currently CBG is not on the list of scheduled substances in the US or by the UN convention on psychotropic substances, allowing it to be easily studied within the law, as long as you can get your hands on it.

If you’re looking for particular strains that are high in CBG, it is best to look for narrow-leafed medical strains from India and the surrounding countries. If you so desired, you could also reduce your finish time to about 3/4 of the recommended amount for maximum CBG yield. Due to the small percentage of CBG available in cannabis, it is also possible for chemists to synthesise the compound, making it a potential medicine for use against several illnesses in the future.

As more people find out about CBG, it is likely to have the effect that we once saw with CBD. Dedicated breeding projects could be started to produce strains that are higher in CBG in order to use their many documented and undocumented medical benefits.

What’s for certain is that we’re only beginning to scratch the surface of the mysteries behind CBG and cannabis in general.