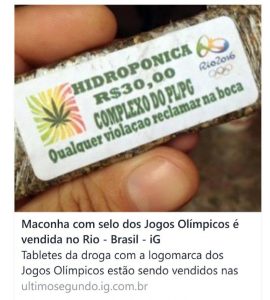 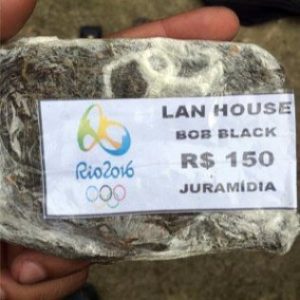 Trust Twitter to show us the dirt behind any event, even the Olympic Games in Rio. To us, that looks like brick weed in shrink wrap topped off with a sticker showing the distinctive logo designed for the 2016 summer games currently going on in Brazil. “Faster, Higher, Stronger” is particularly fitting, don’t you think?

Digging a little deeper, you can purchase these small, vacuum-sealed packs if you’re brave enough to venture into some of the shadier sections of Rio, but it’s probably only a matter of time before these non-performance enhancing meds reach the Olympic Village. No sense in Michael Phelps missing out, right?

Cannabis is definitely illegal in Brazil, but there’s still a pretty healthy trade going on, and no one should expect the local police to pay much attention. The government is broke after footing the bill for the Olympics and hasn’t paid the police or firemen for months, and they’re pretty mad about it. Wouldn’t you be?

Since the police say they won’t bother to protect tourists from any violence in crime-ridden Rio, it’s probably safe to say most will also overlook 420-friendly activities as long as it’s fairly discreet.

How Much Does Cannabis Cost in Rio?

As of today, a Brazilian Real is equal to .32 US dollars, so the green in those Twitter pics cost between $10 & $50. Not too bad depending on the quality. Checking the Marijuana Travels website for Brazil, the average price is $343.96 per ounce for high-quality, $124.40 for mids, and $100.27 for low. But be prepared for some price gouging – someone reported paying $900/ounce for hi-grade in Rio as recently as this past March. That’s a lot, but desperate people do desperate things.

If you do get caught, Marijuana Travels also suggests offering the cop in question some cash. Even in more prosperous times, this would usually get you off with a written warning, but now that the police have gone a few months without pay, he’d probably offer to light that joint for you.

Where to Get Marijuana in Rio?

If you don’t care about quality, just hang out on one of the beaches and keep your ears & your nose open. According to multiple reports, it’s easy enough to get. Some websites will tell you to visit a favela (basically the hood), but people who are in Rio right now say that’s the fastest way for a gringo to get shot, so we can’t recommend it.

For better quality weed and a safer hookup, take a detour to Ipanema, just south of Rio de Janeiro. The chances of finding any fire are still going to be slim, but it should be a step up from brown brick weed. The best area appears to be between Post 9 & 10 – follow your nose or look for the Yerba Mate vendors. Practically all of them deal a little weed on the side.

Not Going to Rio – No Problem!

A little DIY is always better than taking your chances with a hook-up, so plan now with some premium cannabis seeds from Big G himself. Go for the gold with the UK’s own Dr Krippling, or if you’re ready to break some records for speed, check out Fast Buds. Both are true champions!